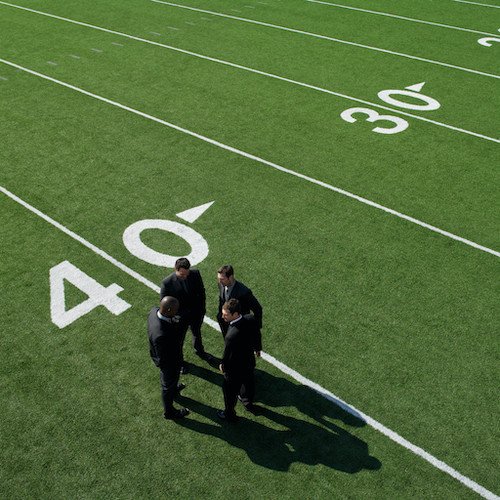 Fall.  It means cool crisp nights, the changing color of the leaves, and … FOOTBALL.  Football and projects are actually quite similar when you think about it.  Plays in football are like individual tasks, and a first down, or series of plays, like a summary task in a project plan. When your team scores a touchdown, they’ve achieved a milestone task, but haven’t won the game yet.

With the start of football season upon us, I thought it might be interesting to take a look at some of the project management lessons we can learn from football:

2. Every project needs blockers to help reduce the risk of obstacles.The offense is comprised of two groups of players: those responsible for moving the ball down the field and those responsible for removing the obstacles to getting the ball down the field. John Madden described the obstacles as “You got one guy going boom, one guy going whack, and one guy not getting in the endzone.” Make sure you know who can help block for you so you can keep the project moving forward.

3. Plan your formations in advance. Whether on offense or defense, each team has a plan for each play when they take the field.  They don’t line up willy-nilly wherever they feel like it. (OK, sometimes that happens, but that’s a penalty). They know what plays they need to run to achieve the next first down.

4. But run audibles when you need to.  If it looks like your planned play isn’t going to work, call an audible. In risk management, you need a mitigation plan to prevent a risk from occurring or to minimize the impact if it does. Don’t be afraid to change plays if your risk assessment dictates a better direction.

5. Allocate resources correctly. There is a reason defensive linemen play that position and not wide receiver. Sure, one may make an interception or recover a fumble, but their primary role on the team isn’t to run down the field with the speed of a receiver or running back. Make sure your project team is comprised of the right resources for the right role.

6. Don’t wait until the end of the project to review the lessons learned. While the defense is on the field, the offense is on the sideline looking at photographs of the other team’s defense, and vise versa.  Reviewing the photos during the game to  analyze what worked and what didn’t, and why, allows teams to make adjustments as needed. Half-time is more than just an opportunity for the players to rest. It’s a chance for the team to meet and make additional adjustments based on their progress during the first half.  Take occasional pauses in your project to review the progress and make changes in strategy if you need to.

7. Take time to celebrate achieving interim goals, but save the big celebrations until the game is over. A football team celebrates when they score a touchdown, and they should. But excessive celebration is a penalty in football, partially because it delays the game.  In football games and projects, to borrow a phrase from baseball great Yogi Berra, it ain’t over till it’s over. Certainly celebrate the milestones in your project, but save the big celebrations until the end.

What is perhaps the best project management lesson from football is a life lesson as well, and is best said in the simple words of the great Vince Lombardi. “People who work together will win, whether it be against complex football defenses, or the problems of modern society.”